MMORPG with great storyline and lightsabers - Light Sabers and the Force are now free thanks to EA's new MMORPG, Star Wars: The Old Republic... Will you become a Jedi or will you join the dark side of the Force?

Star Wars: The Old Republic is a recently released free to play MMORPG developed by Bioware and published by EA and LucasArts.

On one hand, its RPG aspects are excellent but on the other, its MMO qualities aren't so good. The game's creators definitely opted for the pay-to-win model with this one. The cash shop is graciously supplied and gives too large of an advantage compared to the in game stores.

Off the bat, the game had tons of potential for enjoyment. Its Star Wars licensed storyline and the opportunity to make your own customizable Jedi doppelganger had Star Wars fans hooked since their announcement.

Taking all that into account as well as its excellent graphical presentation this game is a worthy detour for any Star Wars fan looking to immerse themselves in an online community of Star Wars fandom.

Star Wars: The Old Republic, courtesy of EA Games, LucasArts and BioWare, is an MMORPG based on, you guessed it, the Star Wars universe. The game lets you create your own Jedi to save the world from crisis.

Star Wars: The Old Republic is a free-to-play MMORPG which has a very, very classical level of gameplay. If you've played World of Warcraft you’re almost there. The main difference between the two is the storyline, which takes place 3,500 years before the films.

This game will probably not slip through the fingers of a fervent World of Warcraft fan as the spells are remarkably similar and the class names- although named differently, function in almost the same way. 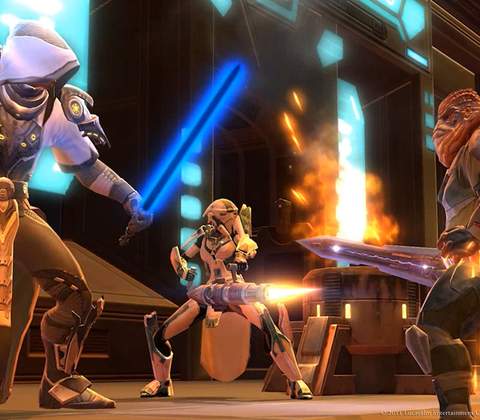 Lightsabers definitely play an important role in SWTOR, but there will be some space also for gun-lovers

The Republic has been taken over by the Galactic Empire who are now working with the Sith who in turn really just want to take over the Empire themselves. The Republic is forced to give up their weapons and have the most important Jedi temples destroyed by signing a peace treaty. It's at this tumultuous and violent point in Star Wars history that your character emerges. He will ultimately shape this part of Star Wars history. But it's up to you to choose how.

The game does succeed at being a financial success for the first MMORPG of the Star Wars series.

Followed by a basic character creation process you have the choice of 8 classes (4 for the Republic and 4 for the Sith Empire), each one leading to 2 possible specializations by the end of the game.
The classes of the Empire and the Republic have different names but are identical.

Here's a little divergence from the all too common WoW formula: the game has cinematics throughout the breadth of the adventure (no that's not all, keep reading) which are variable depending on your choices, leading to different outcomes and pathways to taking during the game (think Dragon Age and Mass Effect). Although they aren't obligatory to watch, they highly influence the course the game's plot takes.

As far as the gameplay is concerned it gets even more predictable. The game constantly progresses through quests. Quest after quest after quest may get boring and frustrating for some players. Probably the best thing the game has going for it is its high level of respect for the Star Wars universe.

Outside of the standard experience point gaining of almost all RPGs, they are still a couple of things to do while spending time in the game like evolving your chosen classes and mastering the art of HuttBall. The conversation choices really help evolve your character's personality and help take away some of the boredom from the incessant questing.

The graphics are another weak point of the game. The animations often fail to correctly show the usage of the Light Sabers, which in a Star Wars game should be number one. The game is not on par with other games of its type with character models and animations looking rigid and almost cut out-style. A little like Lego pieces. 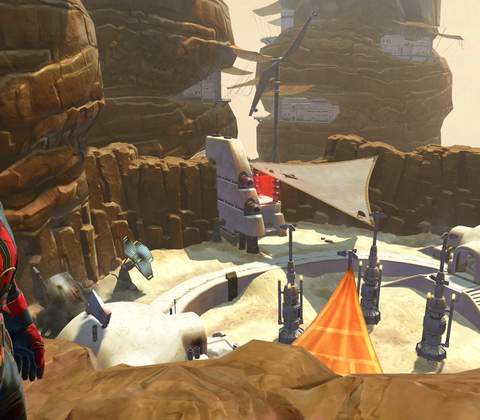 We could hardly talk about this game without mentioning its economy. The game is almost two separate games: the free version and the subscription version. With a monthly subscription players have access to a large amount of items and choices not available to the non paying player. Like other free-to-play MMORPGs, it's very obvious to tell who pays a subscription and who doesn't based off the PVP interactions.

In the free-to-play option the player won't have access to all the areas and the amount of experience to be gained is substantially less than the amount available in the subscription. To make matters worse, the cash shop has way more items than the virtual shops which also have weaker items.

The pay-to-win aspect of the game is noticeable from the get-go.

Despite the game's potential, Star Wars: The Old Republic follows too much the style and business model of Blizzard. Instead of striving to be unique, EA chose to attract more gamers with a proven and already used method to make money.

The graphics are a huge let down and may disappoint certain players. Although the plot is engrossing and will keep many Star Wars fans interested, the filler may discourage some of the more avid gamers and mild Star Wars fans.

We'd really only recommend this game to hardcore Star Wars fans who find the idea of new material interesting.

Ready to enter the world of Star Wars The Old Republic? Click here to play now! 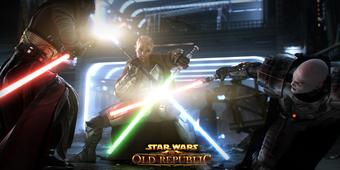 Originality
The morality system and character history gives the game a somewhat unique one player experience.

The customizable personal history of your character

A lot of restrictions on the free-to-play option

Another World of Warcraft clone