Fairy Tail: Hero's Journey is the official online MMORPG of the manga series. For a free to play web-browser game, fans of the franchise will be rewarded as it features authentic characters and story from the manga.

The gameplay is easy to grasp as players pick from one of three classes and progress through the world via leveling up themselves and their companions. Combat is turn-based with party dynamics that are fun to watch due to the excellent animations. However, the battles are passive for the most part meaning you actively do nothing but watch most of the time. The game also has an in-depth cash shop that can be advantageous, but not necessary for end-game progression. Overall, Fairy Tail: Hero's Journey is a good free to play title that will serve loyal fans of the series with plenty of originality and fun.

Fairy Tail: Hero’s Journey is developed by GameSamba and is the official Web Browser game for the Fairy Tail manga series. Originally in closed beta toward the end of 2017, the game is now in open beta and is free to play for all players. Expect to see main characters from the saga that fights alongside you through existing and original stories. 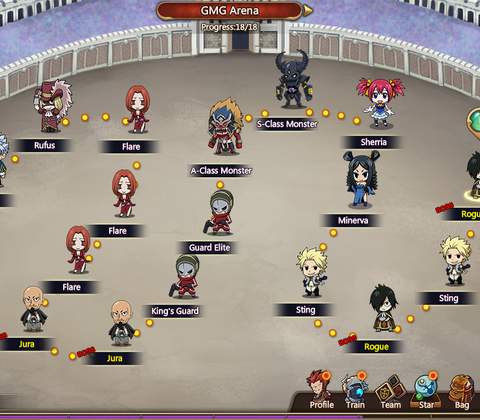 Fairy Tail's gameplay is easy to learn at your own pace

It all begins with picking your character and class. There are three classes in the game, which are Mages, Magic Warriors and Gunners. Each class is distinct in design especially when it comes to choices of combat skills and spell animation. Character customization is unfortunately dull as you don’t get to customize how you look early on. This means that a lot of players will end up looking like each other.

Gameplay is familiar for players that enjoy top-down point and click RPG games. Players pick up quests from NPCs and can auto move as well. The story unfolds with main characters sharing dialogues with each other that can be skipped if one so chooses to. When it comes to performing combat, things become more interesting. Fairy Tail: Hero’s Journey utilizes turn-based combat. Players get to pick their class spells beforehand, and watch the battle unfold in 2D, albeit passively at first in the tutorial. At later levels, you get to build your own Wizard supergroup by recruiting Partners and Pets to fight alongside you in combat. The excitement is heightened when players team up with guild members to take on epic challenges, world bosses and even tackle PvP. The best part is definitely watching your hard earned rare Partners turning the tide in a battle against bosses, making the hard grind to level them all the more worth it. The downside is perhaps that combat feels static and passive, as for the most part you only watch the battle unfold and don’t actively play a part. 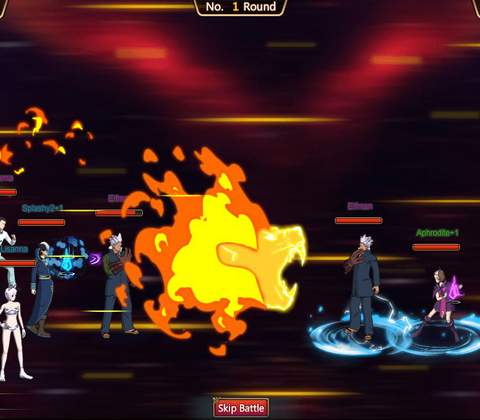 The combat animations are fantastic to look at

The biggest strength of the game is how it stays true to the manga aesthetically. While it is a simple 2D web browser game, the graphics and design of the world, characters and environments are gorgeous. It definitely makes you feel like you are part of the Fairy Tail saga. Better yet, skill animations in combat are excellently designed. This truly adds more excitement in the heat of battle as you watch your favorite companions perform well-known attacks that you’ve probably seen over the course of the comic series. While one might lament that the game would have been better as a fully rendered 3D masterpiece, the 2D setting performs just fine and will probably be very accessible to all players. That simply means, you won’t need a decent computer to play the game. Just a web browser that can handle Flash Player is good enough to enjoy the game.

But besides following the main quest chains, what is there to do in Fairy Tail: Hero’s Journey? Like all good RPGs, the bulk of your progression comes in the form of character leveling. Questing and taking tasks from the Guild Board all reward experience points to increase level and Combat Power. You will also end up collecting companions along the way, which is the progression that’s most important as without a good team, harder fights are impossible. You can also earn mounts and costume rewards for playing. Currency will be important for horizontal progression whereby you increase your skill talent trees or pick new ones for upcoming battles. There’s plenty to do in-game to keep you busy which is a positive as it’s not all about enjoying the story. Progression can be speed up especially for XP gains through the cash shop. The in-game store is slightly intrusive, offering valuable Gold and other benefits that can give players an advantage for paying as there are PvP features at max level. However, these are not needed to enjoy or advance in the PvE side of the game.

There’s plenty to do in-game to keep you busy which is a positive as it’s not all about enjoying the story. 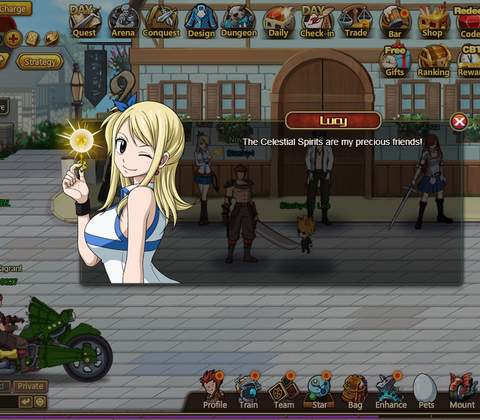 For die-hard fans of the franchise, what about the story? You’ll be happy to note that the game covers the story of the Grand Magic Games chapters from the manga. In fact, it is the first thing you will be doing within the tutorial itself. This is very rewarding for players that are familiar with the series. In addition, the game also includes original stories with existing characters that can only be experience in the game and not in the manga. This gives you more incentive to play through the story. The game definitely offers an authentic Fairy Tail experience for fans of the franchise.

Overall, Fairy Tail: Hero’s Journey is a simple web browser RPG that caters toward Fairy Tail fans. For players not familiar with the franchise, it may be difficult to grasp the backstory and lore that most of the main characters will offer. That doesn’t mean it’s not fun however. For a free to play game, the party building and turn-based elements of combat is a neat little feature that looks fantastic with the gorgeous spell animations, if you don’t mind being the onlooker for most of the time. 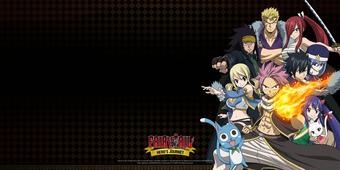 Originality
Besides being the only official game of the Fairy Tail manga series, Hero's Journey adds exclusive original stories not in the comics in a beautifully detailed 2D manga world featuring popular characters from the lore.