When I had first heard of a Soul Calibur MMO, I was a bit surprised. I never would’ve thought that a classic fighting game franchise would enter the world of MMOs. After all, how would an MMO fighting game work? What else would there be to do that online competitive and non-competitive play didn’t already cover?

And then when I went to the game’s website and discovered that it was a Chinese browser MMO all my curiosity dissipated entirely and turned into disappointment. Chinese browser MMOs have a reputation for being a niche genre of video games, that caters to very specific gamers.

You will either like them, or you won’t; there is no in between. If you like games that you can heavily AFK and or put on auto-pilot, then you’ll probably like Chinese browser MMOs, but if you want your games to be engaging and interactive, then these games are not for you. Soul Calibur is your run on the mill Chinese browser MMO. It doesn’t change the wheel in any way, and in some cases, it actually makes the wheel worse.

Soul Calibur starts off with the expected character selection and you get to choose from four different characters; Ivy, Siegfried, Tira, and Nightmare; all characters that fans of the main series will recognize. Once you make your choice, you'll be on your way.

And within five minutes you'll be perplexed by the initial character selection screen, as you run into literally all four characters in the starting area. Why let us pick these characters at all if we're going to run into ourselves over and over? Seems like a better idea would be to just let us make our own characters. 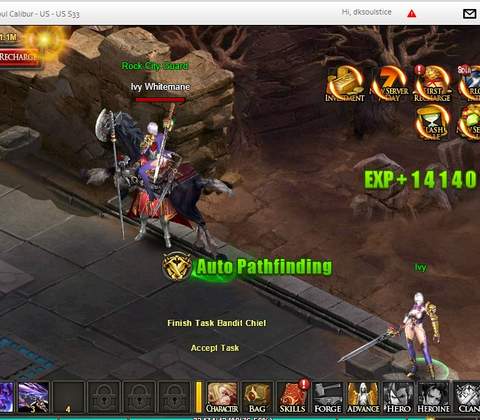 Don't mind me, just galloping past the twin sister I never knew I had.

But hopefully, the game gets better right?

For gamers who like their games to play themselves

Arguably the most standout feature in Chinese browser MMOs that you can expect from every game in this genre, is a heavy emphasis on auto-piloting. Chinese Browser MMOs are 95% autopilot and 5% gamer interaction. Soul Calibur is no different. As soon as you finish your character selection and start the tutorial, the game takes control and immediately takes you to the first objective. And for the next hour continues to do so. The game has auto-pathfinding and auto-battling, so all you have to do is click ‘Okay’ or ‘Continue’ every once and a while.

I would call it a walking simulator, but that’s giving it too much credit because walking simulators still have a lot of interaction with the environment and game world. With Soul Calibur, you barely have to do anything and given that this is a game, this design choice feels very weird. It’s hard to play a game that isn’t engaging, and everything in this game, from the combat to the dialogue, is just boring.

Speaking of the dialogue, it’s as bare bones as it can get. Every character you talk to, only speaks 1-2 sentences of non-engaging dialogue. If there’s a story in this game, I can’t tell, because every line just seems like generic filler. And for an RPG where dialogue is often one of the most important elements in the game, this feels very, very wrong. 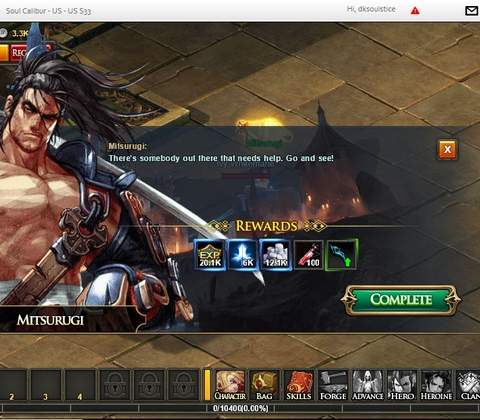 Soul Calibur has this weird contrast where it almost seems like you’re not supposed to care about the story at all. Which is a shame because, despite most of the characters you encounter being from the Soul Calibur series, none of them possess their personalities or character traits from the main franchise. The developers had a lot they could’ve have worked with, perhaps tell a prequel story, but they didn’t capitalize on the opportunities they had.

Lots of rewards for little effort

When it comes to RPGs or many video games in general, genre notwithstanding, one of the best things to a gamer, is progress. In many other MMOs, when players max out an account, they create another one, so they can grind their way to the top again. It’s almost like a rite of passage. You start out with your Iron Sword and Wooden Shield, killing giant rats in a dungeon. You venture forth out into a big world and get your butt handed to you by nearly everything, be they kobolds, wolves or orcs. You keep grinding and training and eventually, you get a bit stronger. Slowly but surely, until eventually, you’re a god, and all the monsters that gave you trouble before, no longer do. It’s extremely satisfying. Which is why Soul Calibur is very disappointing. 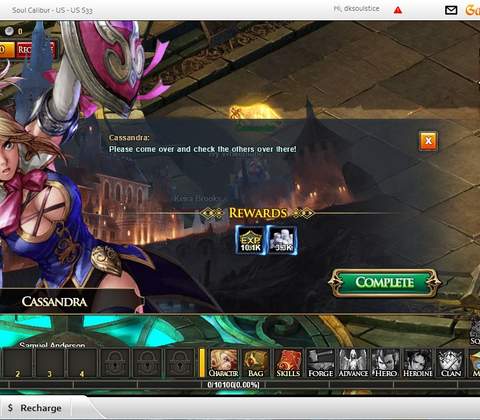 5 seconds into the game, you’re given a healthy amount of experience and silver for doing practically nothing. And by practically nothing, I mean your character takes about three steps, talks to an NPC and you get rewarded for it. In fact, this is pretty much how the entire first hour of the game is like. You just go around talking to people and blitzing through levels for no reason at all. It doesn’t make any sense. How is this supposed to be enjoyable?

The (auto) combat isn’t any better. Unlike in most other RPGs where you struggle at the beginning, in Soul Calibur, you start off one-shotting literally everything that attacks you, and it just doesn’t feel right. There’s no progress, and your rewards, don’t feel earned. Players shouldn’t be level 40 within one hour of playing a game.

Plenty of technical issues and no technical support 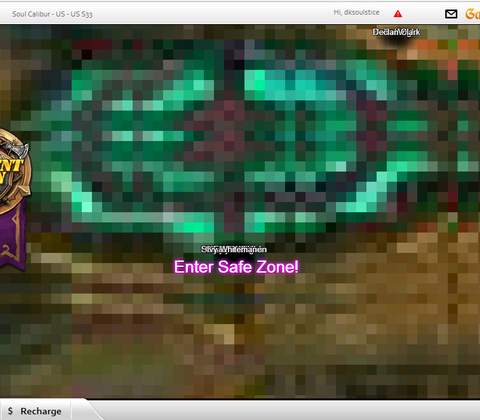 Being greeted by this screen is not going to give players a good first impression.

Soul Calibur has a fair share of technical issues. For starters, as soon as you load up the game, you’re met with a blurred, pixelated screen as the game takes about 20 seconds to load in the textures. The game is afflicted with random instances of crashing, and sometimes servers don’t even work at all. Not all the bugs in this game are frustrating though, some are even amusing. One such bug is how sometimes NPCs, players and monsters are completely invisible and the only thing you can see is their health bars. 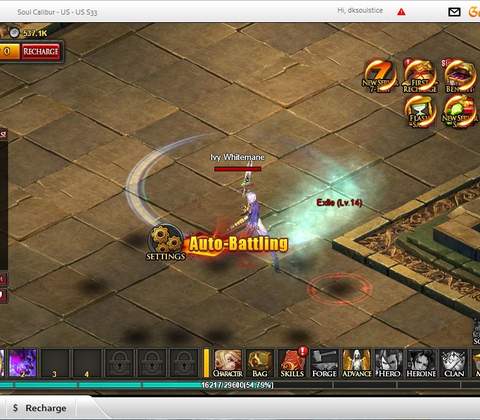 Don't mind me, just fighting the air where the enemy should be.

All games have problems so that’s not too bad, but what is bad, is the fact that getting into contact with the developers, is all but impossible. They don’t interact with players on their FaceBook page, and the ‘Support’ tab on the game’s main page, leads to a broken link. I’ve tried using the ‘Contact Us’ button, but it isn’t even clickable at all.

Very P2W but I’m sure you already knew that

Within 5 seconds of starting the game, I was bombarded with an in-game transaction pop-up. And the more I progressed, the more and more offers I received. Character offers, mount offers, in-game item offers etc. It’s all very obnoxious, and soon my screen was absolutely flooded with pop up boxes, cluttering the UI. It looks like a FaceBook casino game more than it looks like an RPG. 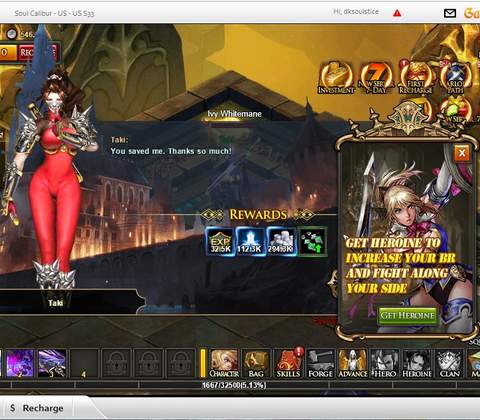 All the obnoxious popups make the UI very cluttered and annoying to navigate.

Final Thoughts: One of the worst of its’ very niche genre

Chinese browser MMOs cater to a very small market of players; always have and always will. For most gamers, this is not your cup of tea and not even avid Soul Calibur fans should not bother with this game.

Soul Calibur is very boring. The combat is bland, the story is nonexistent and the dialogue is bare bones to the highest degree. Nothing in the game engages with the player, the rewards feel like participation trophies rather than rewards that feel earned. The satisfaction you get from progressing your character just isn’t here because the game quickly progresses your character for no reason.

The game isn’t very well-explained, and there are a lot of features that you’re just left to figure out as the game rushes you through the tutorial. There are “guides” on the game’s forums, but each post is only a few sentences and doesn’t really explain much. The developers basically have no presence in the community so players are left to fend for themselves for pretty much everything.

And then, of course, there are the P2W elements, which I honestly don’t understand in a game like this. The player base is small, and the game’s lifespan will likely be as long as that of a 7-year-old’s pet goldfish. Why would anyone spend a ton of money on a small game like this? This kind of milk the cow while it lasts game model, doesn’t really work for small timers. It pushes away potential players, making your already smaller player base even more minuscule.

Ready to enter the world of Soul Calibur? Click here to play now! 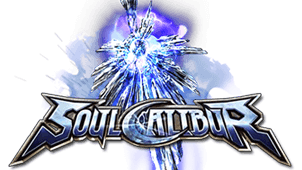 Originality
There is nothing original about this game. It's a standard Chinese browser MMO that uses characters from the Soul Calibur series.

Game plays itself to a fault

no sense of progression and rewards don't feel earned