Blood Rites is a free to play Asian fantasy MMORPG, first released in 2011. The game features a tab-target combat system, four classes and plenty of progression systems to sink your teeth into. These include weapon enchantments and the more popular Elf companion system, which lets you increase attributes with pets. In the content department, the game's PvE dungeons and raids is where you'll have the most fun, as opposed to the unbalanced PvP modes and a bland story and questing experience to level cap. Graphics and visuals doesn't do Blood Rites any favors, but players actively looking for a classic MMORPG won't mind that too much. Elswhere, the in-game cash shop can be obtrusive if you want to be a competitive player, but otherwise the game is completely playable as a free title.

Blood Rites is a free to play Asian fantasy MMORPG that was first released way back in 2011. The game features full 3D graphics, and all the staples of a theme-park MMO. Players can expect questing in multiple zones, plenty of solo and group dungeons for content, and even PvP. Once downloaded, the adventure begins with a simple character creation process. You'll get to pick from a few simple customization options, but even now, 8 years later, it is disappointing to note that nothing new has been added to give character models a fresh look. You also won't be picking a class archetype as that comes much later. Once done, it's time to head into this new world to seek out thrills and adventures. 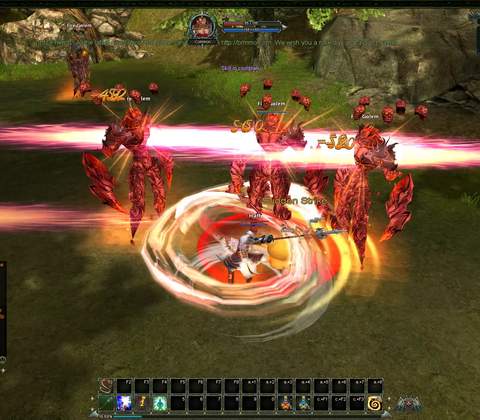 Like most MMORPGs, Blood Rites is easy enough to grasp. You move your character with the WASD keys, but you can also point and click if you choose. The opening hour or so involves an interesting but often tedious series of introductory quests. You''ll learn about questing, quest hub crawls, NPC interactions and more. It is clear that in 2019, that the early parts of the game was designed for MMO newcomers back in 2011, and the developers haven't revisited the early areas to give them a revamp. However, there are fun elements in the beginning, like understanding your character's abilities. Players earn skill points every time they level up after level 3, and can spend them in their skill trees which is determined by which weapon they equip. For example, the abilities and skill trees for wielding a sword will be vastly different from that of a bow. Once you have a weapon of choice, combat is the next thing you'll do. Blood Rites uses a traditional Tab target system which is decent, and skills on your hotbar goes on cool down when used. You'll have plenty of skills by the time you're at end game, so don't worry if the early parts of the game feels slow due to lack of skills.

While combat growth is largely determined by levels, skill points and gear, that's where the typicality of this MMO ends. For its time, Blood Rites also encourages plenty of exploration and collection for achievements. What's more, the game utilizes an interesting take with regard to in-game companions. The Elf System is one such feature, in which players collect Elf minions and can grow them up over time and effort. This will yield benefits to your character's attributes down the line which is handy for end-game content and PvP obviously. While interesting, take note that to acquire the best companions requires an insane amount of grinding or spending money in the cash-store. Besides companions, pets and mounts are also popular features in Blood Rites. For starters, there are a large variety to choose from. Pets are by far the best bang for your buck and time. Some of them have abilities that automatically picks up loot dropped from enemies for example, which cuts out a few valuable seconds in your adventures. It's a quality of life and convenience feature that's nice. However, most of these types of pets you get are on borrowed time. Once activated in your inventory, a timer begins that counts down until its expiration. You don't permanently own pets and mounts in Blood Rites. You only rent them which is a shame, as it forces you to constantly spend more money in the cash store for your collections. Overall, there's enough progression in this game to satisfy fans of classic MMORPGs, if you can stomach the free to play hook, line and sinkers to bypass grinds.

Blood Rites offers plenty of PvE content so you'll never run out of things to do. Players can follow the main story quests in addition to accompanying side quests all the way up to the level cap. While it may not be enough when it comes to XP, worry not as there are plenty of grinding spots with monsters to make up the difference. Even better, the game constantly opens new servers that provides 50% experience buffs, which makes adventuring through the world or level alts easier from time to time. The quality of questing is where your enjoyment may vary. Some quests have zero story or even intelligible dialogue, which can ruin the fun factor while others have interesting characters and setting. Expect to see plenty of fetch and kill quests right up until the late game. Dungeons and raids are the best parts no doubt, as you get to play with others and see how the synergy between class abilities work. The boss fights are challenging, and there's plenty of trash mobs to get pass before that, so there's loads of XP loot if you're feeling adventurous. The game also encourages PvP with a few modes such as Arena, Tournaments and more. These are unfortunately not balanced so enter at your own peril. Finally when it comes to the story, it's sad to say that the truth is, it's largely forgettable. The early parts orientates you to nothing but a new player welcome without fleshing out what world you're on, who the good and bad guys are, and what you're fighting for. Those key plot points come much later on, but the sluggish world building takes up so many levels that by the time you get there, you're no longer interested. 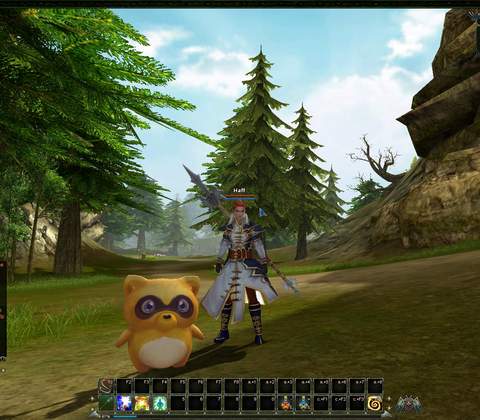 Companions need nurturing for passive stats, while pets have active abilities that are useful.

If how a game looks is important to you and you prefer fancy fast paced and pretty visuals, Blood Rites might be a downgrade from whatever game you're playing. The game has not aged well in many departments like environments, character models and in-game sounds. You can definitely tell this MMORPG was made a very long time ago, as grass and rock surfaces look incredibly bland even on the highest graphic settings. Having said that, the combat animations have been rather impressive especially for melee characters. Up close, AOE attacks look pretty good compared to ranged or caster classes.

Blood Rites is a classic MMORPG that offers the bare minimum amount of fun, content and progression for players looking to have a good time online, but it does come with severe flaws. While the game's lack of any meaningful story and poor graphics have been documented already, another worrying aspect to think about is the cash shop. In it, you'll find packs that do contain items, gear and powers up for real money. Players can still enjoy the game for free of course, but consider what you're up against in PvP if you decide to dip your toes in that type of content. Overall, Blood Rites is still a fun adventure if you've never played it before and its dungeons, raids and companion systems will be the parts you remember.

Ready to enter the world of Blood Rites? Click here to play now! 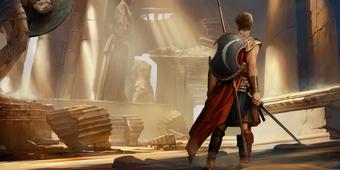 Originality
Blood Rite's Elf Companion system lets you grow, nurture and train a companion to fight alongside you in your adventures that drastically improves your character. It's also a collection system which means there's tons of variety of variations of what to get and for which situations.