Uncharted Waters Online is a captivating blend of historical fact and RPG fiction, where players attempt to make a name for themselves on the high seas. From humble beginnings as a student in the maritime academy you must learn the skills necessary to survive and thrive in a world full of danger. Take command of your very own ship as you set out to explore the world and uncover new opportunities to increase your fame and wealth. From the safe confines of your home Nation you will be taken on some epic expeditions and perilous trips into the unknown.

Dive in to the history books and set sail on an adventure like no other. Uncharted Waters Online is an all-encompassing MMORPG which will take you to the ends of the Earth as you trade, loot, explore and battle your way to greatness. The concept and setting, in the historical real world, are beautifully represented and the game more than warrants the rather lengthy download time (depending on internet connection speeds of course).

Trade, loot, explore and battle your way to greatness

Once players have patiently watched their download creep to completion they will be presented with the option to choose, create and name their character. There is a basic selection of body shapes, hair styles and outfits to get you started on your travels and there is the typical RPG element of selecting specialist skills to compliment your style of play. 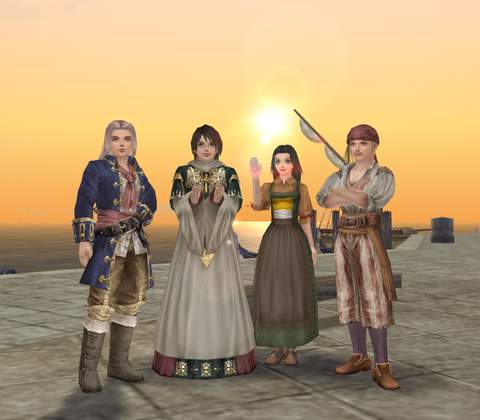 Choose your character, profession and country.

There are 6 different factions to ally yourself with in the game and these are represented by countries of the world, namely England, Spain, France, The Netherlands, Portugal and Venice (which was a City State during the time period covered in UWO).

Players will find themselves starting out in a city within their chosen country and will be given a brief introduction to the controls of the game. These are fairly standard with W, A, S and D controlling character movement and left-clicking the mouse selects objects or interacts with NPC's and other players. As an alternative, players can also control their character's movements by clicking on-screen or by clicking locations on the mini map, which is displayed in the bottom right of the screen.

The first steps of your journey begin at School, which may not sound like a barrel of fun, but it is essential to learn the basics of the various elements involved in the game. Upon registering at school and donning your uniform (yes, even virtual characters cannot escape school uniform!!) you can begin a lesson from one of three tutors, who each specialize in different topics. These topics relate to the myriad of actions that are open to the player and it is very easy to feel completely overwhelmed by the amount of information the game throws at you.

The lessons quickly become boring and repetitive, with many simply consisting of the player walking to a location, reading several passages of text and then returning to the school to complete the lesson. This was definitely not a highlight of the game and it was refreshing to finally complete the beginner level(s) and get out onto the open sea.

Fortunately the rewards for completing the school quests are more than adequate for you to purchase a reasonable ship from the Shipyard in your chosen city. In fact, players will find themselves with plenty of money to add the odd upgrade(s) to their ship and resupply their provisions several times over. The fact that players aren't forced to purchase additional currency with real world money is very positive and only further enhances the fact that Uncharted Waters Online truly is "free to play". 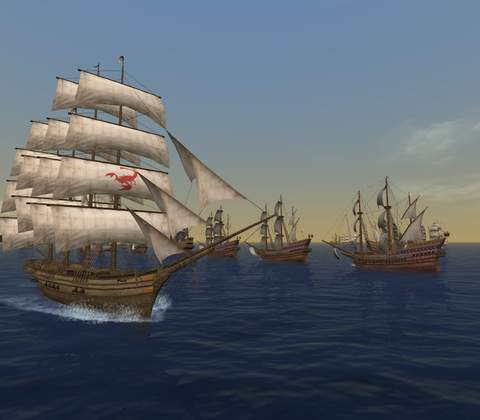 One day you could be sailing one of these.

The mechanics of managing your ship are fairly simple and it won't take players long before they are lifting their anchors and heading off across the waves. All ships need a crew and you will need to recruit sailors from your city, each ship requires a certain number in order to be operational.

Your crew will need supplies to keep them going, namely food and water, and these can be purchased from the Port before you set sail. A further provision you will need in abundance is Timber, which your crew will consume when they carry out repairs to your ship.

The beauty of Uncharted Waters Online is the freedom offered to players to develop their character and explore the world however they wish to do so. Of course money is crucial to managing your ship and funding your adventures and there are opportunities to earn money by completing quests, trading goods between ports or by unleashing your inner pirate and plundering other players. Each option is not without risks and once you venture into open waters you are likely to run into pirates who will attempt to make off with your cargo.

Ship-based combat is something you will have to get used to and for beginners it can be quite confusing. Basically when you encounter an enemy ship you are required to maneuver around each other, trying to avoid cannon fire, whilst simultaneously pointing your own cannons at the enemy and firing at will until they are destroyed.

If your ships enter close proximity then your crew may become engaged in a melee battle, whereby you will proceed to become even more confused as you watch some animated zigzags appear around your ships and witness your crew numbers disappear before your eyes!

Avoid cannon fire, whilst simultaneously pointing your own cannons at the enemy and firing at will

Either you will emerge triumphant or you will find yourself adrift with no crew and a good chunk of your cargo declared missing in action! Combat is definitely something which takes time to master and the easiest option is to attempt to flee, which is done by sailing out of the marked "combat zone". 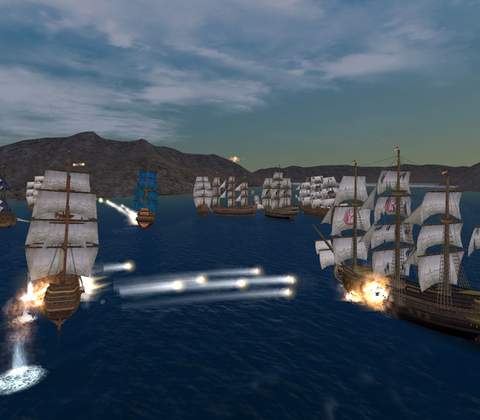 You're going to need cannons... lots of cannons

Don't let any of these negative points put you off though, they are mere drops in the ocean compared to the positive offerings that Uncharted Waters Online provides. Once you have completed the tutorials and mastered the basics of exploration and combat you may well be hooked. This game is literally huge and the freedom offered to players is incredible for a Free to Play game. Be prepared to spend many hours on the high seas once you get involved in Uncharted Waters Online, it will lure you in and capture your interest before you even know it. Well worth playing to unleash your inner merchant... or pirate for that matter! 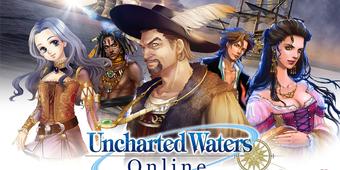 Originality
Whilst the RPG elements will be familiar to players of the genre, the unique theme and historical settings make Uncharted Waters Online an original concept well worth exploring.

Ship combat can be tricky for beginners